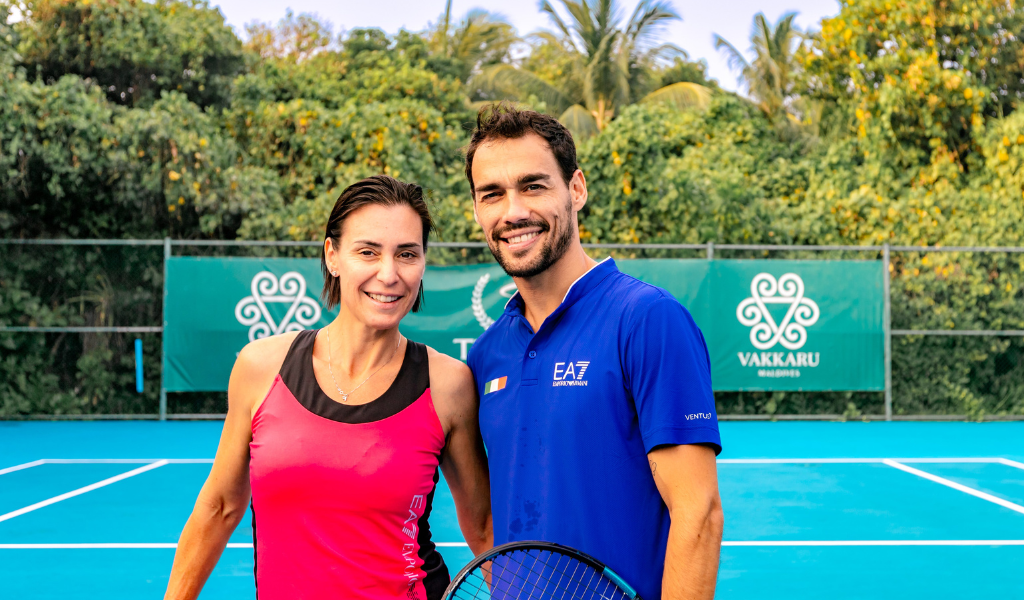 The timeless sanctuary of Vakkaru Maldives has welcomed the arrival of Italian professional tennis duo Fabio Fognini and Flavia Pennetta along with their three children. The family will be exploring the lovely scenes of Vakkaru Maldives from the 30th of November to the 7th of December in a much-awaited holiday experience.

The world-class tennis athlete, Fabio is marked for his powerful groundstrokes and his lethal inside-out forehand and is currently residing in the 55th position of the Association of Tennis Professionals (ATP). Fabio had his highest-ever career ranking on 15th July 2019 when he marvelously reached the World No.9 position. Playing well on his most successful surface, red clay, Fabio has secured 8 of his 9 ATP singles titles, particularly the 2019 Monte-Carlo Masters. He has also managed to reach the quarterfinals of the 2011 French Open and won the 2015 Australian Open Doubles championship with his partner Simone Bolelli, going down in history as the first all-Italian men’s pair to win the Grand Slam title in the Open era.

His wife, Flavia is a former tennis pro who was ranked among Italy’s top 10 female singles players in August of 2009 and was the first to be awarded the title of World No.1 in doubles in February 2011. As a tennis champion, Flavia won the 2011 Australian Open women’s doubles title with her partner Gisela Dulko and beat her childhood friend, Roberta Vinci to the title at the 2015 US Open singles, the first-ever all-Italian major final.

Since Vakkaru Maldives opened its doors in 2017, it has been a popular destination among celebrities and sports stars to spend their vacations. Hollywood celebrities like Madonna and a number of Bollywood names have spent their vacation in Vakkaru ranging from romantic getaways to fun-filled family stays. Speaking on his choice of Vakkaru, Fabio remarked that he chose the property as it provides a myriad of options for couples with young children and offers an ambience where he can relax during the tennis off-season.

The family took the time to explore various offerings and experiences during their time in the Maldives from exclusive dining to invigorating spa and Ayurvedic treatments and even the plethora of water excursions that can be enjoyed in the scenic UNESCO Biosphere Reserve of Baa Atoll. In addition to this, Fabio also hosted a special coaching/playing session for five fortunate guests in a rare experience like no other.

Since November 2020, Vakkaru Maldives runs its very own intensive tennis program partnering with Tipsarevic Luxury Tennis, founded by former World No.8 tennis player Janko Tipsarevic. The resort also recently resurfaced and renovated its tennis courts rivalling the standards of international-level courts worldwide. Moreover, the resort even introduced a Padel tennis court to its Sports Fields in July providing a comprehensive range of sports facilities at the property and making the destination ideal for luxury tennis experiences.